Timeline of the Arabian Peninsula 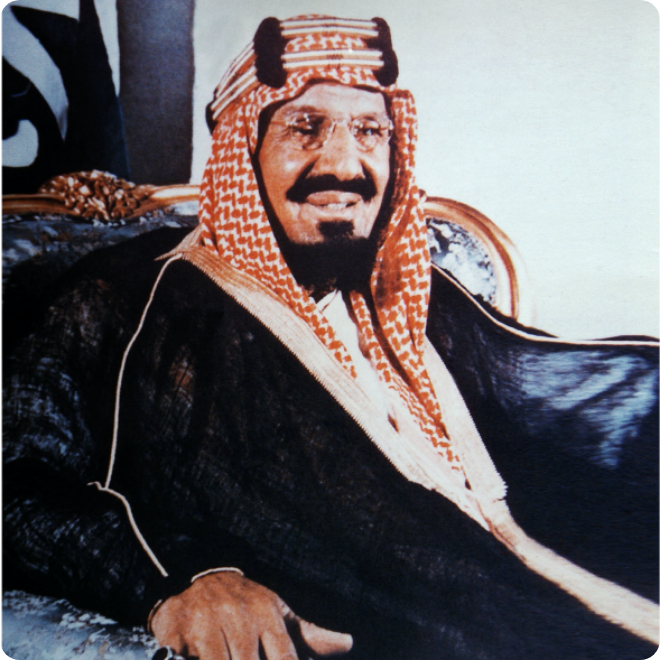 History of Kingdom of Saudi Arabia

The Kingdom of Saudi Arabia has a rich culture shaped by the diversity of its people, which has formed the basis of the cultural identity of the Kingdom.

With over 34 million inhabitants, the Kingdom has 13 regions all united by the Arabic language, but each with a unique dialect, traditions, heritage, and culinary identity.

The people of Saudi Arabia embrace many social values influenced by the Kingdom’s ancient customs and traditions, including generosity, courage, hospitality, and maintaining strong family relationships, as well as values that reflect the society’s culture and Islamic values.

His achievements also included expanding and developing services provided to pilgrims, as he ordered the expansion of the Two Holy Mosques, the establishment of the General Directorate of Hajj, the establishment of health quarantines, the construction of roads and multiple means of transportation. He has also prioritized education and the spread of knowledge by encouraging students of knowledge. At the last stages of his life, King Abdulziz established the Council of Ministries to be the culmination of his administrative and organizational achievements.

Abdulaziz’s eldest son Saud acceded to the throne in 1953 and continued his father’s legacy establishing the Ministries of Education, Agriculture and Commerce during his reign. One of King Saud’s greatest successes was the development of education in the Kingdom. During this time many schools were established, formal education for women began and the first university was built, King Saud University in 1377 AH / 1957 AD. In addition, the first military college opened, the King Abdulaziz Military College in Riyadh and the Army was better trained and developed to be able to defend the Kingdom.

King Saud also made his mark globally, he abolished slavery and became the first Saudi monarch to visit the United States in 1957. In 1962 he sponsored an international Islamic conference that would progress and become the Muslim World League, headquartered in Makkah.

Following on from the efforts of his founding father, he continued to care for and provided Islamic pilgrims travelling to the Holy sites with greater comfort in their pilgrimage and expanded the Prophet’s Mosque and Al-Masjid Al-Haram (Great Mosque of Makkah)

Among his most prominent achievements were the establishment of the Ministry of Justice and the Supreme Judicial Council, the establishment of agriculture, real estate and industrial funds, the irrigation and drainage project, the sand confinement project in Al-Ahsa, the Haradh agricultural project, the livestock development project, the investment of wastelands and the provision of agricultural loans to citizens. The Public Corporation for Petroleum and Minerals (Petromin) was established during his reign, and education under his watch witnessed special attention, as His Majesty encouraged women education and increased the number of students on scholarship to study abroad , and his support with higher education. His achievements also included social aspects, such as the establishment of social security, the role of social education and social insurance, the establishment of the General Presidency for Youth Welfare, his Majesty also took care of wire and wireless transportation, and the establishment of the Public Railways Corporation. During his reign, the first five-year development plan began. King Faisal also contributed to the completion of the expansion projects of the Two Holy Mosques, most notably the expansion of Al Mataf, and the inauguration of that project in 1387 AH / 1967 AD.

The educational renaissance during his reign has witnessed a great development, as the King Faisal Universities were opened in Dammam and Umm Al-Qura University in Makkah al-Mukarramah. His Majesty also took an interest in agriculture, and during his reign, grain silos and flour mills were established. In addition, the state also paid attention to encouraging the industrial sector and preparing industrial plans to raise the level of industry and manufacturing in the country. In the health field, King Khalid also contributed to the completion of the two Holy Mosques projects, most notably his order in 1397 AH / 1977 AD to make a new door to the holy Kaaba out of pure gold and the inner door that leads to the roof. During his reign, the third phase of the expansion of the Grand Mosque was also carried out, and he was also interested in developing The Saudi army and its weapons, and the development of the National Guard

Under King Fahd bin Abdulaziz, who adopted the title Custodian of the Two Holy Mosques, Saudi Arabia developed economically, and across Government and society to emerge as a leading political and economic force.

King Fahd was instrumental in diversifying the Saudi economy and promoting private sector investment as well as instituting agricultural development and investment in infrastructure. He increased the number of schools and colleges, and established King Khalid University

During his reign, the basic system of government was further developed, the Shura Council system was amended, as were the Government Regions system, followed by the development of the Cabinet system in 1993.

One of King Fahd’s greatest accomplishments was a series of programs to accommodate the millions of pilgrims who wish to come to the country each year. This included the two largest expansions of the two holy mosques (Al-Masjid Al-Haram, and the Prophet’s Mosque) as well as the expansion of airports and ports to enable pilgrimage and the establishment of the Ministry of Islamic Affairs.

King Abdullah’s early education was at the Royal Court and influenced by his father King Abdulaziz he developed a deep respect for religion, history and Arab heritage.

During his reign, education developed rapidly, with the number of universities in the Kingdom doubling from eight to more than twenty. Colleges and technical and health institutes were opened, including Princess Noura University (PSU) and King Abdullah University of Science and Technology (KAUST), and a number of economic cities.

King Abdullah sought peace in the Middle East, and it was his proposal that became known as the Arab Peace Initiative designed to bring an end to the Arab – Israeli conflict and improve the plight of the Palestinians.

He also prioritized the expansion of the Two Holy Mosques expanding the northern squares of Al-Masjid Al-Haram and completing the new Jamarat Bridge to alleviate the congestion for the pilgrims. In addition to the Zamzam water project and the issuance of the Succession Commission Law.

The first hundred days of King Salman’s reign were considered one of the most important royal periods in contemporary Saudi history, during which many crucial and important programs were launched and implemented.

The birth of a new era, starting with the reorganization of state institutions, merging some ministries and establishing new ones. Followed by the reduction of bureaucracy by abolishing many higher councils and establishing two councils for economic and development affairs, and for political and security affairs, and financial restructuring instead, the appointment of qualified younger ministers who better reflected the broader class of citizens, and the launch of a phase of combating corruption and extremism.

King Salman then launched the Kingdom’s Vision 2030 and approved a number of programs and initiatives that were prepared under the supervision and guidance of His Royal Highness Prince Mohammed bin Salman Al Saud, the Crown Prince.

Under the direction of King Salman, and through the Kingdom’s G20 presidency in 2020 the member states came together to confront the impact of COVID 19 on people’s lives, livelihoods and on the global economy. The Saudi G20 Presidency was instrumental in supporting poor and developing nations through the crisis and in making sure vaccine and treatment efforts were invested in and fully supported for all those in need.

King Salman bin Abdulaziz has continued to take crucial decisions to bring about change in the Kingdom and address the challenges and restrictions that were hindering the country's growth and openness, most notably: reducing administrative and financial corruption, empowering women in the labor market, allowing women to issue driving license, judicial change and development, and growing the tourism, entertainment & cultural sectors. And by making sure Saudi businesses were supported in developing the capacity and skills to produce more and provide jobs in the country.

King Salman bin Abdulaziz also focused on expanding the Al-Masjid Al-Haram, and the Prophet’s Mosque to facilitate the performance of Hajj, Umrah and visiting rituals, and conducting qualitative rehabilitation of the Zamzam Well.

Journey of Kingdom of Saudi Arabia

Towards a vibrant society, a thriving economy, an ambitious nation